Should I switch to mirrorless?

I didn’t pay much attention to the mirrorless systems that Sony and other manufacturers were coming out with, until about early 2015. I can’t remember what struck me to dig deeper, but once I realized what Sony was offering, my interest started to peak! Seeing the image quality and specs that these cameras were producing, while designed around a smaller and lighter frame, made me really consider making changes.

Time to sell the Canon gear!

I had thousands of dollars invested into my Canon gear. Selling everything and buying a new system was a big decision! I debated it back and forth for a little while, but after seeing the benefits of a smaller system AND better image quality, I decided to put all my gear for sale.

Luckily, many people still desire the DSLR’s so selling everything was a breeze and I didn’t really take a big loss. I kept all my original boxes and paperwork (something I highly recommend doing! and all the gear was in great shape! If I think about it, with all the photos produced from my old gear (paid and personal), it MORE THAN made up for the few hundred dollars lost in resell!

The Sony a7ii had just came out as I was ready to buy. The in-body stabilization and ergonomics was a big selling point to me and I dove in head first! I purchased the A7ii with kit lens, the Sony 70-200, and the Rokinon 14mm F2.8 to start with. I couldn’t wait to receive it and start learning the new system.

When the camera arrived, I was not disappointed. I spent all day test shooting, configuring the custom settings, and playing around with the different features. I loved everything about it! Making the switch was well worth it and I highly recommend it to anyone looking to lighten your load and downsize without sacrificing image quality.

Was it worth it?

After shooting for about half a year with this set up, I still don’t regret making the switch. I love having more compact gear to travel with! I also find it much more thrilling now to be more covert and “un-noticed”. Its funny – I now tend to look at travelers and tourist with full-sized DSLR’s tugging down on their necks, and feel deeply satisfied with the choices I’ve made.

With the urge to go more compact, I have also been considering purchasing the smaller, but FANTASTIC Sony a6000 with a couple of compact lenses to REALLY lighten my load for travel, as well as having it for a secondary camera. The combination of the two would be a really solid set up in my opinion (I think the compact movement is getting addicting, haha!).

Anyway, I’ll wrap it up with this: If travel photography or being more covert is something you desire, I would highly recommend looking into the different mirrorless cameras on the market. Honestly, no matter what kind of photography you plan to be doing, these cameras seem to be outperforming the DSLRs all over the charts! There are lots of reviews and videos all over the web and it’s growing by the day. I would highly recommend doing the research to see if making the switch is right for you…  I did, and I never looked back! 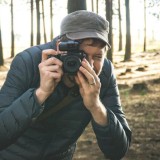